You can easily judge a pair of games released within the same generation. You simply compare their graphics, mechanics and other tangible qualities with the knowledge that with the exception of certain “blockbusters” both developers had relatively the same technological resources at their disposal. Nowadays there is even a good chance that they were both built on the same engine.

But it’s not as easy to objectively compare titles from years gone by with their modern day counterparts; and we very often fail to do so, much to the detriment of our enjoyment of current gen titles and to the chagrin of our friends.

Doom, the genre defining shooter from iD Software, may not have had iron sights, grenades, a cover system or melee attacks but we don’t hold those things against it because it’s positive qualities still stand out to this day. This makes Doom an example of excellence regardless of its antiquated graphics or simple key card finding level structure.

We often allot them a disproportionate amount of space in our precious and limited emotional real estate.

Some games just resonate with us, their qualities transcend time and we will always look back on them with fondness in our hearts. We often allot them a disproportionate amount of space in our precious and limited emotional real estate.

Modern interpretations simply cannot compete with the wonder of ‘the first time‘ because when you initially played a game with a new and innovative approach to gameplay you had an epiphany, a euphoric rush of realization as to how a particular gamestyle could and should be.

The first time you leap through the air in slow motion and headshot two guys on the subway platform of Max Payne’s opening level or the first time you see the Prince rewind time in The Sands of Time, you can’t believe your eyes. 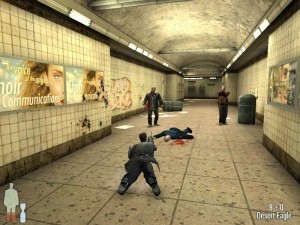 Until that point you hadn’t yet been inducted into this new and better way of thinking and in gratitude for services rendered you will love that game for the rest of your life.

When a game strikes a chord like that, it changes you. You will replay it once a year for the rest of your life because to you, it is timeless. You will try to share it with each and every person you can steer into a conversation about it and you will always be met with bitter disappointment when they don’t parrot back your endless praise.

These are the dangers inherent in wearing the titular +1 Rose Tinted Goggles of Nostalgia.

When a game doesn’t hold up well under the scrutiny of time, we say that the game “hasn’t aged well”. We want our games, like fine wine, to get better over time. A very small selection of games have managed this and in doing so are often mentioned together in reverent tones.

The aforementioned Doom, the early Mario and Sonic games or the endlessly vaunted Ocarina of Time, each is beloved by millions who eagerly make it their solemn duty to keep those memories alive and to share them with people, this generation and the next.

Even today we can see these cross generational oaths at work as there is nary an arcade or non-corporate owned pizza parlor worth it’s pepperoni that doesn’t seem to have a Ms. Pacman cabinet tucked somewhere in the back.

Some games tend themselves. They’ll be around no matter how much time passes and they need no one to attend to their memory. However, some games are an endangered species. They sit precariously on the precipice of popular culture threatened to plunge into oblivion and be forgotten forever.

That is why we often, with a certain sense of urgency, try to ignite a flame for our old favorites in new players, so that should one torch be extinguished it will not be forced to go gently into the night.

And it never works

I have tried to share certain games with multiple parties over the years and each and every time it’s been a failure.

…inexorably linked to a dozen other fond memories like a caramel apple stuck in a ball of cotton candy.

They often cite antiquated graphics or underwhelming gameplay as reasons why their feelings about a certain game aren’t equivalent to my righteous fervor.

As if graphics and gameplay are legitimate complaints about a game I love?!
About a game I played at a seminal moment in my upbringing.
About a game that is inexorably linked to a dozen other fond memories like a caramel apple stuck in a ball of cotton candy.

Their ignorance can be infuriating.

Intellectually, I can understand their perspective. Maybe the pacing of old school Final Fantasy is a little slow or maybe Star Fox’s then revolutionary use of un-textured polygons does look nowadays to the untrained eye …kind of crappy. 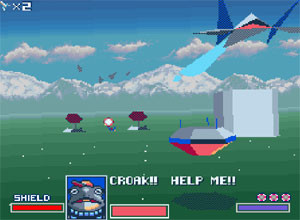 But I love them all the same, I wish they could experience the wonder I’ve seen with my own eyes.

And then in the ultimate exercise in hypocrisy when they show me something that made a huge impact on them all I can see is 640 x 480 screen resolutions and patience testing (and often defeating) user interfaces. Press [S] to sleep? How’s about I press Alt+F4 instead.

You can’t manufacture nostalgia. You can work towards creating fond memories today which in time may develop into nostalgia but you will rarely if ever succeed in performing a successful transplant of your joy about a legacy game into someone else.

It’s frustrating and disheartening but if you examine this sobering truth under the right light, you may find that the relationship you have with certain games are in fact a tremendous boon.

You and it share an exclusive bond that others will never understand. Those rare games can be a font of wisdom for you to draw upon when judging current and future generation games. A special resource no one else possesses.

So the next time you get the urge to share an old game with somebody, first ask yourself:
“Is it the game I want to share or the feelings I had while playing it?” 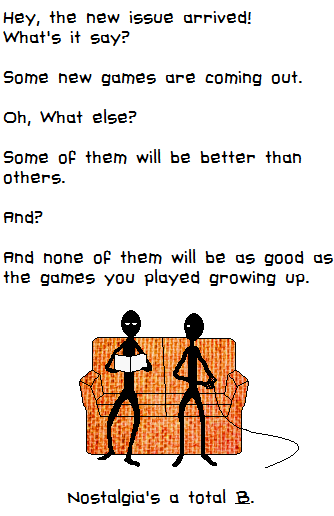 The following is an incomplete but chronological list of games that I love and wish you did too:

What are some of the games that hold a special place in your heart?