The Path, created by Tale of Tales, is a deeply engrossing and haunting retelling of the Little Red Riding Hood fairy tale told through brilliant abstract imagery, an ingeniously crafted soundscape and a prying look into the darker side of human nature and the perils faced by a girl on her journey toward adulthood.

The adventure begins inside the home of the Sisters Red, six girls ranging in age from 9 to 19, each of their names a synonym of the color. Your cursor is a Basket of Goodies that is to be brought to Grandmother’s House. You begin by selecting which of these girls will carry out this seemingly innocuous task.

Little do you know what hardships you have just unwittingly thrust upon this innocent young woman. 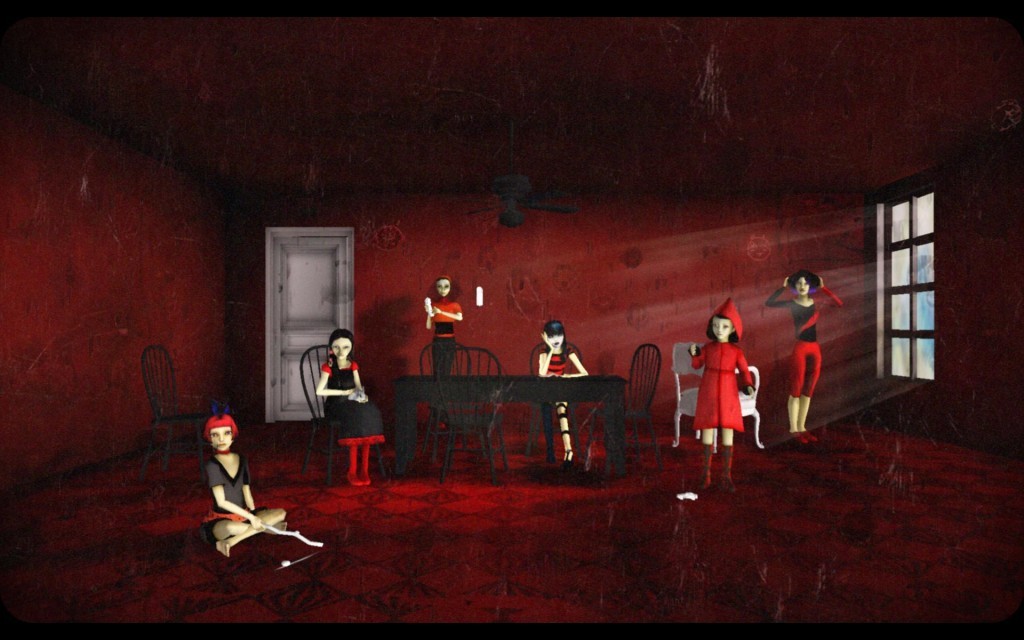 You are then transplanted from a cramped inner city apartment to the woods where you appear on The Path. It is a pristine trail leading safely to Grandmother’s House. The road cut through the woods is inviting and lovely with crows flying about and ample sunshine. On either side of it is a dark and forebodeing forest.

At this point you are given a singular instruction: ”Go to Grandmother’s House …and stay on the path”

Once the urge to explore the dark woods on either side overwhelms you The Path truly begins.

The woods are an ominous and dreary place. Light is choked by thick coniferous trees and only scant rays pierce the canopy. Below it grow all sorts of strange, almost Cretaceous flora and fauna. The forest floor is littered with strange objects and locations.

When you run through the forest your camera angle will tilt downwards and follow the girl from a higher vantage, colors will become muted and overall ambient lighting will wane until you are unable to discern which way your going or what features are ahead you. The soothing sounds of nature and children’s distant playful chants will be replaced by a cacophony of frightening rustling, chains clinking, scraping violin notes and gravelly, unhinging growls.

When you stop abruptly your camera will return to a comfortable 3rd person perspective. This is a very interesting mechanic because it makes the forest a much more menacing place because it is impossible for you to ever truly get your bearings. Gradually you come to accept the fact that you will be lost for the duration of your journey.

Gradually you come to accept the fact that you will be lost for the duration of your journey.

Throughout The Path your screen is a kaleidoscopic canvas of momentary artifacts that flash into view and fade away. Animal tracks, strange symbolism and scratches will bloom and then disappear. Swirls of white and black patterns will appear along the margins, sometimes seemingly guiding you along.

Dotted throughout the woods are 144 collectible flowers which act as vague road signs to other destinations and for every 100 meters you travel a “map” will be appear for a few moments as a twisting, serpentine path detailing the route you have traveled thus far. 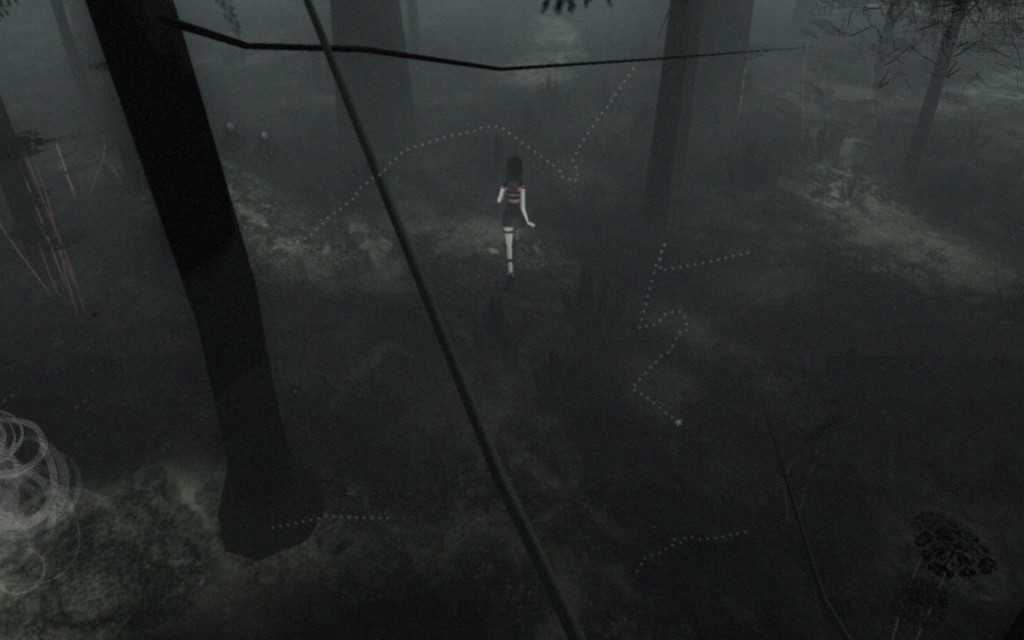 As you wander without a specific destination in mind you will eventually stumble upon a set piece location that acts as a physical metaphor for a personal truth or ideal that the young woman clings to.

When you approach the object it will become superimposed on the screen in ghostly emphasis. At this point if you relinquish control the girl will interact with it on her own. An icon will appear in the corner of the screen representing the “memory” being placed into your Basket of Goodies.

Whether it be an abandoned wheelchair, a brick wall covered in graffiti or a scarecrow in a field of flowers, the current girl’s internal monologue is then printed across the screen in a scrawled child’s handwriting. Some are just playful observations while others can be disturbing insights that the girl may be oblivious to –but you are not. 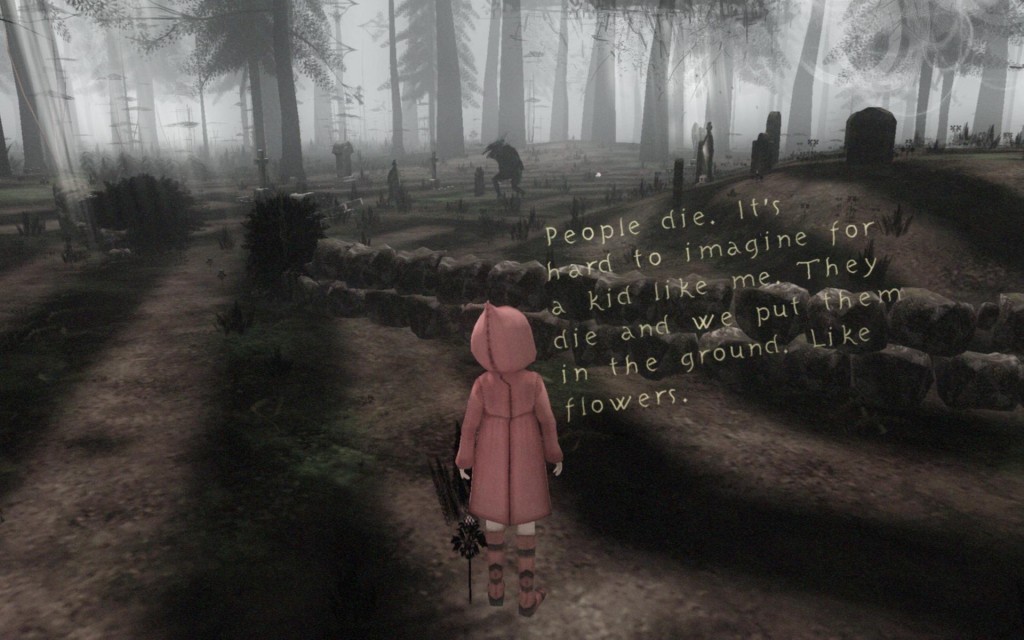 Then your in for quite a shock about five minutes from now.

The Girl in the White Dress

Once you leave the safety of The Path you can not again return to it on your own, attempting to backtrack will only lead you deeper into the woods. Throughout your adventure a mysterious, almost ethereal “Girl in White” will appear periodically. Her playful mannerisms are in stark contrast to the world around her. She runs, arms extended like an airplane, through the woods. Doing cartwheels and skipping merrily along, seemingly immune to the gloom around her.

If you want to leave the woods all you have to do is walk up to her and she will take you by the hand and lead you out of the dark woods and back to the safety of The Path. You are never told who or what she is but with the exception of one girl’s encounter her intentions seem to be wholly benign and helpful. 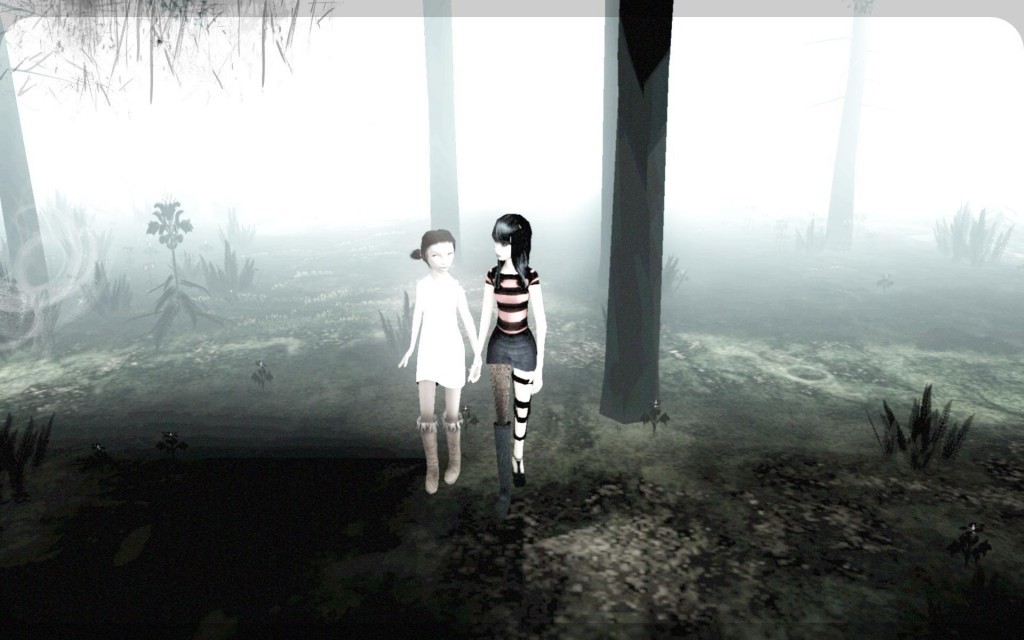 We Each Have Our Wolves

For each girl there is a wolf lurking in the forest, not hunting her down but waiting for her to stray from The Path and come to him.

The wolves are not always presented as a four legged predator but as various dangers or obstacles that a female of that particular age might face.

These are the themes that set The Path above a mere noir nod to a classic fairy tale and transform it into a series of artistically told allegories about peer pressure and sound judgement or disturbing cautionary tales about heavy subject matters such as rape and the dangers that can lurk behind a stranger’s smile.

Many games love to throw abstract images and ideas at a player allowing them to draw their own conclusions behind the piece but The Path differs in this respect because it seems to have meaningful things to tell the player if they are observant enough and brave enough to contemplate the dark side of growing up.

Scarlet’s preoccupation with order and it’s potential destructive capacity. Ginger’s rebellious tom-boy nature and refusal to grow up. Ruby’s bleak outlook and disregard for the gift that is life. Whichever girl you choose to play, each exists in a relatable stage of adolescence that will cause you to ponder your own past and the wolves you have faced, some of which you escaped; others you did not. 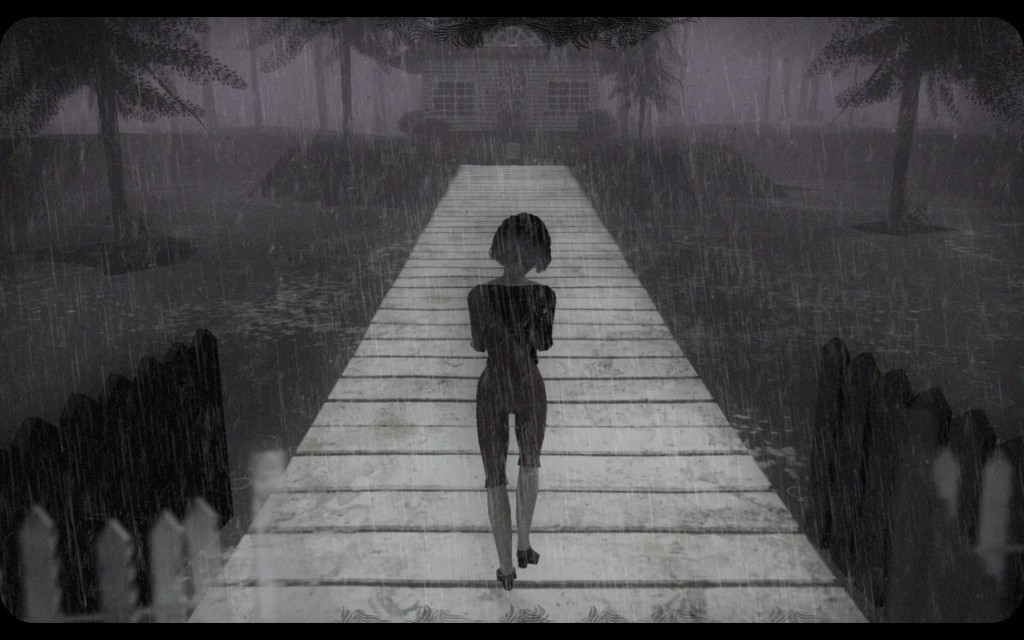 Once a girl encounters and briefly interacts with her own “personal wolf” the screen will fade to black and transition. Fading back in you find the girl disheveled and unconscious at the foot of the bridge that crosses over to Grandmother’s House.

Night has come and a torrential rain is pouring down. As she lifts herself off the ground it is clear from her body language, that something awful has just happened to her. With her head slunk low in shame and pain, you must then slowly cajole her to shuffle the last few steps to Grandmother’s House.

The final act of each girl’s scenario takes place in Grandmother’s House whose layout appears differently for each of the girls and is a frightening and twisted amalgamation of imagery you have gleaned from your trek through the woods. You proceed through the various rooms of the house on a set track in a first person view.  The path you take is determined by the “memories” you collected before encountering the Wolf. As you progress through the house, each room presents you with sights and sounds that are disturbing to behold yet undeniably fascinating to examine with a yearning to understand. 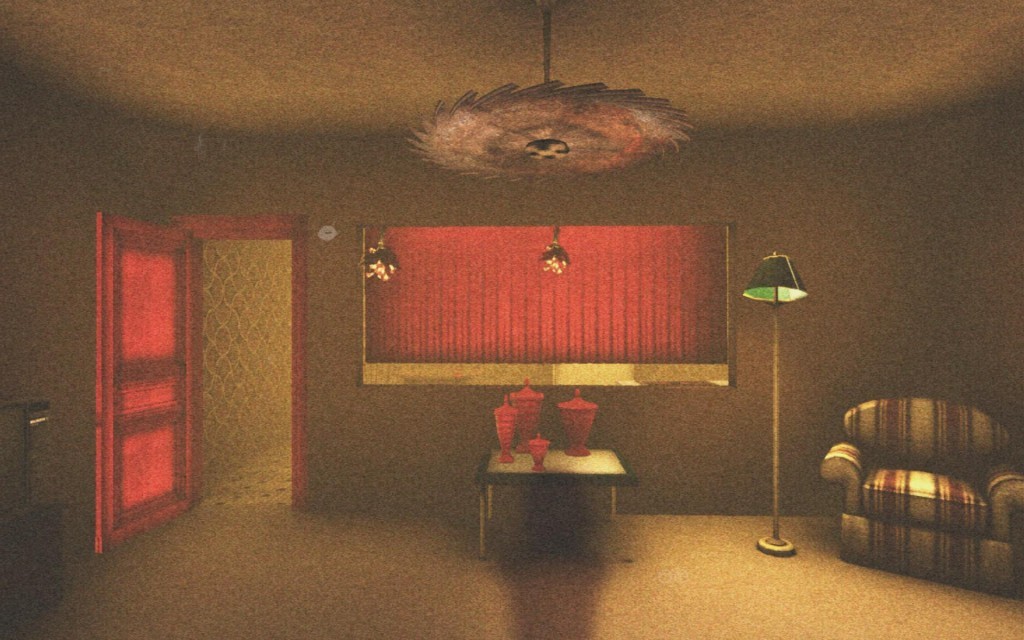 At the end of each girl’s playthrough you will have learned about her hopes, dreams and secret desires. You’ve explored her fears and foibles, cursed her naivete and in the end are forced to watch powerlessly as her unwise decisions ultimately lead to her own demise.

Then you will find yourself back in the tiny apartment with the remainder of the sisters. The burden now falls again to you. To choose who next will walk (and ultimately stray from) The Path.

Yes, You should absolutely play this game. You should play it with your friends, family and lovers.

The Path is unlike any work of interactive fiction ever created. It feels deeply insightful while at the same time providing very little in the way of concrete explanation. It’s composition caters to introspection. The lessons it has to teach, or rather the lessons you teach yourself through it, will stay with you long after your first playthrough. The Path is a phenomenal achievement especially considering it was built from the ground up almost entirely by a team of two highly creative individuals on a shoestring budget.

Why so high? Artistic, poignant and engaging. Nothing else like it.
Why so low? Some set pieces are large and force you to explore them at a painfully plodding pace.

Note: I first played The Path when it was released nearly three years ago. (March 18 2009) It made such a huge impression on me that I felt compelled to share it with our readers.
I initially had some trouble getting it to run. Thankfully, I was able to get it working by following these instructions provided by the developer.