Until I played Serious Same BFE I hadn’t realized how significantly the First Person Shooter genre had changed over the last few years. Many players decry modern day conventions like the infamous  ”two weapon limit” and “regenerating health/shields”, but does it really make that much of a difference?

After all your still just a disembodied gun meant to blow away every other moving thing on screen.

The answer is Yes. It makes a huge difference.

Serious Sam BFE (Before First Encounter) is easily one of the most chaotic and intense games ever.  During the first hour of play I killed more enemies with the starter pistol then most games have enemies in their entirety.

Serious Sam BFE stays true to it’s previous installments by effectively transplanting the ”horde mode” into a single player campaign. Throughout your playthrough you will be assaulted by a seemingly endless onslaught of foes attacking you from all directions. Only the most skilled and spatially aware players will be able to control the onscreen chaos. It is not uncommon to turn a corner to find yourself up against over a dozen enemies, and more than that, you’ll quickly become aware that killing enemies causes even more to spawn! Usually right behind you.

In order to have a fighting chance in Serious Sam BFE you must always be vigilant, aware of your surroundings and constantly in motion.

Circle Strafing is back in a big way

Circle Strafing is back in a big way as its the only real method of controlling the influx of deadly creatures. By moving in large circular patterns you can effectively corral clusters of enemies. This makes it easier to gun down parades of enemies all focused on killing you.

In most games the more realistic the enemies pre-programmed behaviors the better they are looked upon. Flanking and communication between foes is generally regarded favorably by reviewers because it helps to create a more believable experience, Serious Sam BFE takes a wholly different approach.

Each enemy has a limited set of tactics, some inch forward firing on you while others charge at you with wanton disregard.  Your only chance at surviving is to visualize all the different angles and trajectories and place yourself in the least dangerous spot at that particular moment in time. Whether that means dodging six relatively slow moving projectiles being fired at you every few seconds, or turning and putting distance between you and a kamikaze headless man with bombs for hands. 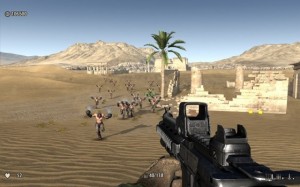 Why yes, that is the next 40 enemies all at once.

The dialog in Serious Sam BFE is ridiculous, hearkening back to the action movies of the late 80s/early 90s when the only thing a protagonist was expected to say was a corny one liner between every few kills.
The silly stuff that comes out of Sam’s mouth is routinely cringe-inducing but surprisingly it works to great effect. Sam is a gruff sounding alpha male, but his repertoire isn’t focused entirely on tired cliques about his  astounding virility or misogynistic overtones. In fact, the only other significant character in the game is the voice of a woman who directs you through your tasks. It’s refreshing to discover that she doesn’t fall into the typical roles relegated to women in video games. That of either Shallow Sexpot or Stern Ice Queen.

At one point Sam finds the grizzly remains of the man he was supposed to save, the dead man’s cell phone begins to ring, Sam picks it off the bloody floor and answers. It’s his “handler” on the other line.  He informs her that the man is a goner to which she replies “Did you at least find his cellphone?” Sam does a double take and responds “You mean the one you just called?!” It was witty and unexpected and didn’t rely on a few trite stereotypes.

Most of them are simply refined versions of what have been showing up in FPS arsenals for years. You have your Pistol, Shotgun, Machine Gun, Double Barreled Shotgun, Rocket Launcher, Chain Gun, Rapid Fire Laser and Sniper Rifle, but you also have access to some more unique weapons in the form of a devastating close-range Sledgehammer, Remotely Detonated C4 and a ridiculous but useful Cannon Ball firing gun that literally ”bowls over the competition” 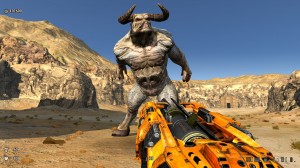 Get your hands dirty

This iteration of the Serious Sam franchise also introduces some very effective melee attacks, rather than just performing an impotent stab with your combat knife or trying to hit a foe with the butt of your gun, each of the lesser enemies (the ones less than a story tall) have a specific scripted melee attack associated with them, whether it’s tearing the single eye out of a bloodthirsty Gnaar or smashing a space bug into gooey paste, many enemies in the game can be eliminated with a single button press.

To offset their power, each of these “execution moves” takes a moment to perform and even though it may only be a second or two, this is often enough time to find yourself swarmed by other enemies. This helps reserve melee takedowns to the rare occasions when you’ve managed to carve out ample space between you and the other enemies or when there are just a few left over.

I liked this feature because it added an additional level of strategy to gameplay. There are some large, heavily armored bugs in the game that can absorb a large amount of damage but you can walk right up to them and rip off the protective plating on their head, killing them instantly. This is by far the most effective method of dealing with this enemy type, but you can only use it when standing in one place, for one second. Which in this game is likely to get you killed. 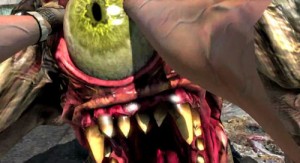 I would normally give a resounding Yes! but in this case I have to offer one caveat: If your first introduction to FPS games were the likes of Halo or Call of Duty, you might not find what you are looking for. This game is a love letter to the golden age of FPS games like Doom & Quake, where speed & accuracy are crucial and being hit by a bullet brings you one step closer to an inevitable death and reloading a previous save, not just a temporary inconvenience that can be shrugged off by resting your head against the closest chest high wall. Throughout the game I think my average health was about thirty-three.

Serious Sam looks good and plays great, the gameplay could be interpreted as dated, but I wouldn’t agree. It actually seems fresh simply because there hasn’t been a game with these sensibilities in several years. This is not a game for the feint of heart. It is best played in relatively short stints as the epic battles you face are quickly draining because of the shear number of factors a player needs to be aware of in order to be successful: Where am I? Where are the enemies? Where are the projectiles in relation to where then enemis are and where I am? How much ammo do I have left? How many bullets are in my clip? All these questions must be satisfactory answered in order for you to survive the current encounter, and you won’t be able to rely on ducking for cover to fully revitalize yourself.

Why so high? No tacked on RPG elements or half implemented morality systems, just guns a blazin’ and guts a flyin’. A Pure FPS experience.
Why so low? Occasionally challenge spills over into the ridiculous when you push too far forward, too quickly and trigger scripted enemy spawns. You will find yourself up against impossible odds. A larger quantity of ammo and health power-ups scattered about would have tempered the game, making it more “survivable” during some of the more extreme portions. Also they introduce new weapons at a snail’s pace.