The Walking Dead is an insanely popular graphic novel series, acclaimed cable television show and now an excellent adventure game. The Walking Dead was developed by the well loved Telltale Games, creators of the Sam & Max, Jurrassic Park and Back to the Future games which utilize a similar story telling style.

Rather than follow the exploits of the characters from the graphic novel and television show, you are introduced to a new protagonist trying to survive in the same “walker” infested world of creator Robert Kirkman. 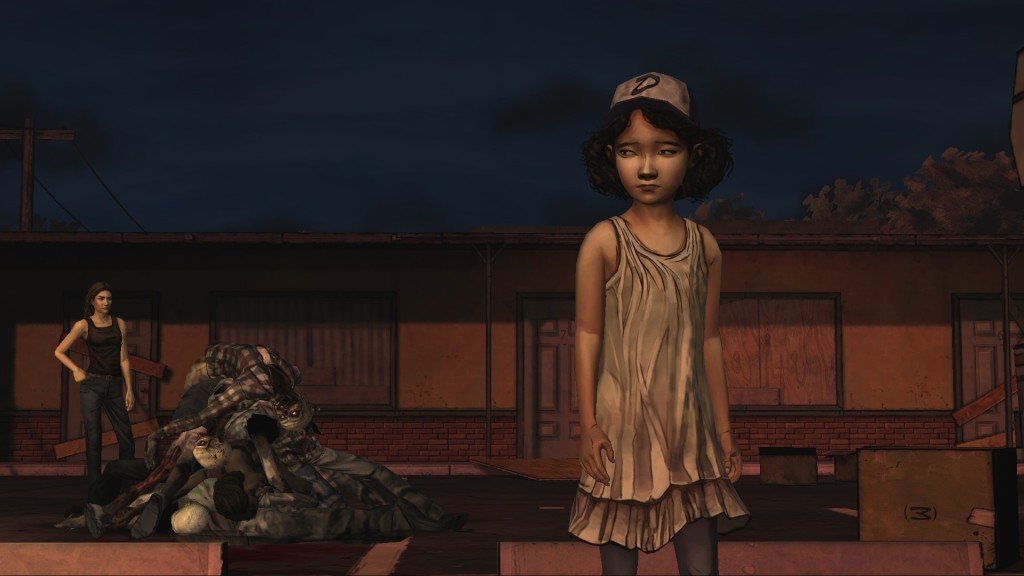 You take on the role of Lee Everett, who was a once an English Professor and now a convicted killer. Though the exact details of the crime you’ve been convicted of remains unclear.

The story begins in the backseat of a police squadcar as Lee is being transported to prison. As the game quickly runs through the basic controls at your disposal the dispatch radio and the scenery whizzing by outside foreshadows the pending disaster. Police and emergency vechiles are flying past on their way to some crisis in the city behind you and there are reports of violence coming in over radio chatter. Next thing you know your police escort strikes a shambling man in the road and the car with Lee trapped inside careens off the highway and into the woods.

Thus begins your harrowing tale of survival. One which you will play a pivotal role in the lives (or deaths) of the other survivors you meet. 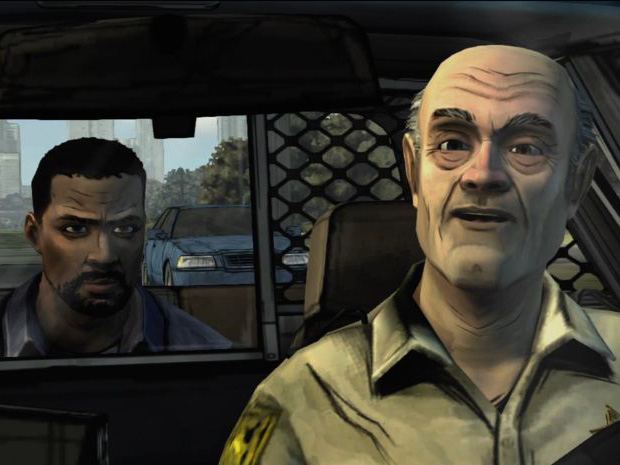 The Walking Dead’s movement controls are actually reminicent of the fixed perspecctives used in the original Resident Evil games. You move around with the left analog stick at a fixed pace while the camera stays in place but pans to keep you in center frame. I found this to be a very effective method of putting the locations on display while still leaving room for exploration.

There aren’t any pixel-hunts or need to combine two arbitrary items like in many other games of the same genre.

Unlike other survival horror games you will not find yourself repeatedly double-tapping zombies. The Walking Dead has always been more about the relationships established between the survivors and not about going gung-ho on the undead. A majority of the game will be spent in relative safety as you and your group hole up in various locations and try to ward off the undead while keeping their own humanity intact.

There aren’t any pixel-hunts or need to combine two arbitrary items like in many other games of the same genre. Most of the puzzles are straight forward, simple and relatively easy to logically extrapolate a solution to.

The core of the gameplay revolves around dialog trees which allow you to respond in very different ways to your fellow survivors. It works well, as you can choose to lie to characters or side with one person’s point of view over another’s. The NPC will take note of your responses and what you say may surface later in other conversations you have down the line in very unexpected ways. 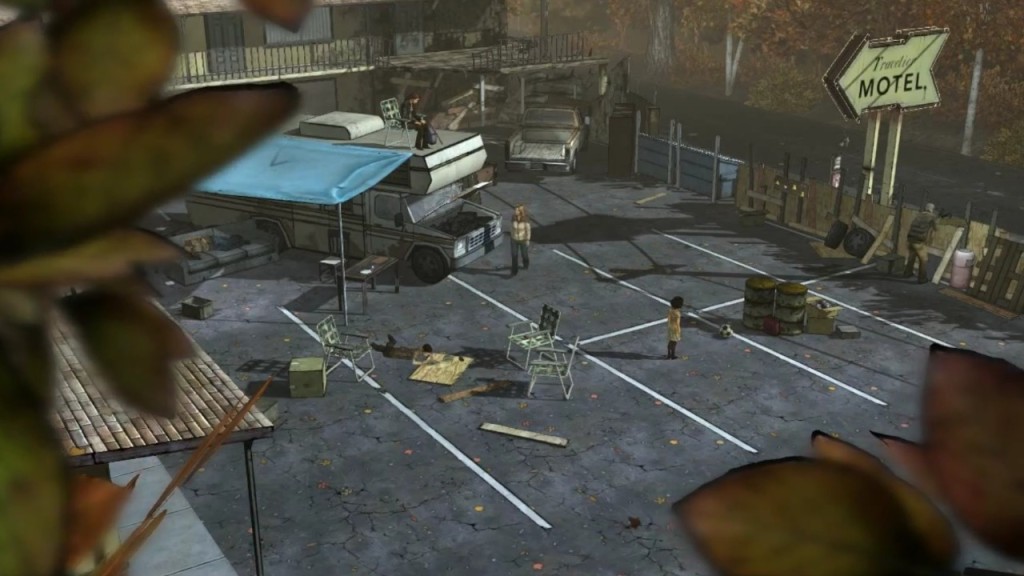 Each of your fellow survivors transcend typical tropes and archtypes and have their own personal human strengths and flaws. A person you meet will seem like a control freak and an all around distasteful person but as you learn about them you begin to realize that their demeaner is just a defense mechanism used to keep people at bay. Then again, you will also meet people who at first seem friendly and helpful but eventually will reveal themselves to be dangerous to you and your group’s survival. 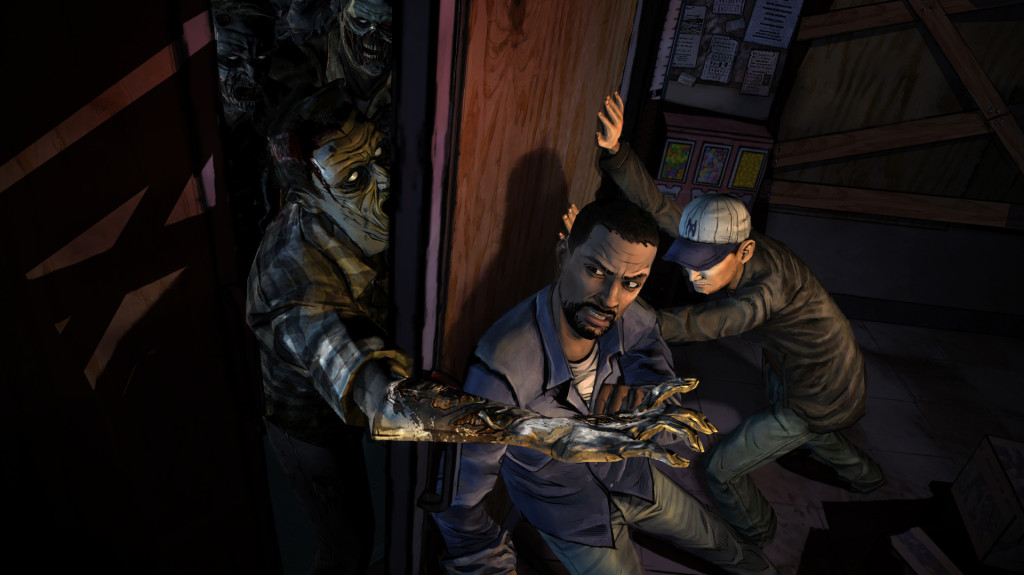 …it is frustrating to have to wait months to play additional content that you’ve already paid for.

The Walking Dead is an episodic adventure. Each episode is being realeased several weeks apart. Currently two of the projected five episodes have been released. Each takes several hours to complete and the decisions you make in previous episodes will affect how the storyline unfolds. While it is an excellent way to keep players invested in the game, it is frustrating to have to wait months to play additional content that you’ve already paid for. 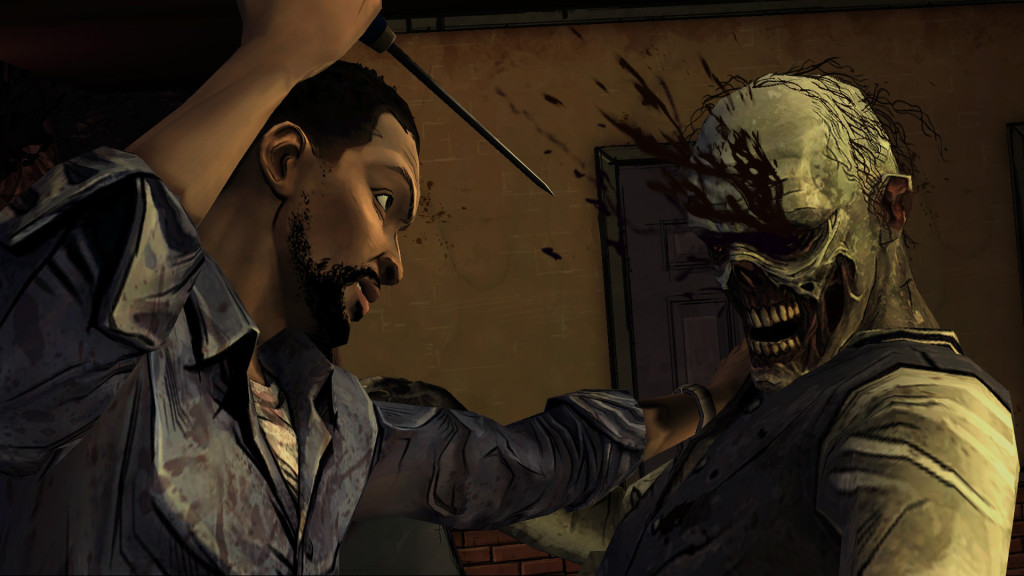 The Walking Dead will appeal to many types of gamers. Adventure Game enthusiasts will find themselves right at home, gamers who want action and blood will find plenty of violence to satiate their appetites and gamers that hold story paramount above all else will also be treated to a meaningful and thoughtful narrative.

Why so high? Intriguing plot, believable characters, decisions with genuine consequences
Why so low? Simplistic gameplay, waiting weeks between episodes