Krater: Shadows Over Solside, by FatShark, is a top-down Action RPG in the same vein as the Diablo, Torchlight and Dungeon Siege series.

Krater takes place in a post-apocalyptic Sweden, surrounding a mysterious and massive chasm in the ground that adventurers have flocked to in order to make it rich excavating the technology and relics of the “Old World” found within.

You will spend your time delving deep into underground caverns, abandoned factories and surprisingly verdant wilderness for a game where almost everyone wears a gas mask.

You simultaneously control three team members at a time by clicking on a spot on the ground for them to move towards. Each of your party members fall easily into the standard holy trinity: Tank, Healer and DPS/Crowd Control (CC).

Each teammate has access to two class specific skills. Unfortunately, these are the same skills that you will be relying upon for much of the game.

To create more variety in your abilities you also have the option to attach “Boosters” to each of your character’s skills. This is a simple and effective system. The most obvious Booster to apply are “Healing Boosters” which add/increase the healing done by an ability by incremented amounts, based on the Booster’s rank.

While adding +5 Healing to your Medikus’s heal spell is all well and good, a more interesting application is to apply it to a typically offensive skill.

For example, you can attach a Healing Booster to your Bruiser’s spammable Cleave skill, thus each time you swing your uprooted road-sign (or whichever weapon you have equipped) you actually gain life back. Another example is applying the same Booster to your Regulator’s AoE Slowdown spell, so that any allies caught within it’s effective area will actually regenerate health while the opponents are slowed to a crawl.

Krater is an attractive game, it’s locations are easy on the eyes and plausibly constructed within the lore of the game world.

Navigating the world of Krater takes the form of an overworld map viewed from far overhead where your position is indicated only by a simple arrow icon. As you move the arrow around the map there is a possibility that you will incur a “random encounter”.

Random Encounters cause you to appear in a procedurally generated arena with only one exit and a variety of baddies standing between you and it.

Each location on the overworld map is either a town or the entrance to a multiple level deep dungeon.

Throughout the course of the game you will travel to towns/quest hubs to obtain a variety of mildly entertaining quests that while presented in a fun and quirky manner never advance beyond the typical “Fetch X” or “Kill Y” variety.

Once you’ve collected your quests you then journey to one of the surrounding dungeons to collect or kill the preordained amount of units to complete your quest. Than, rinse and repeat ad nauseum. 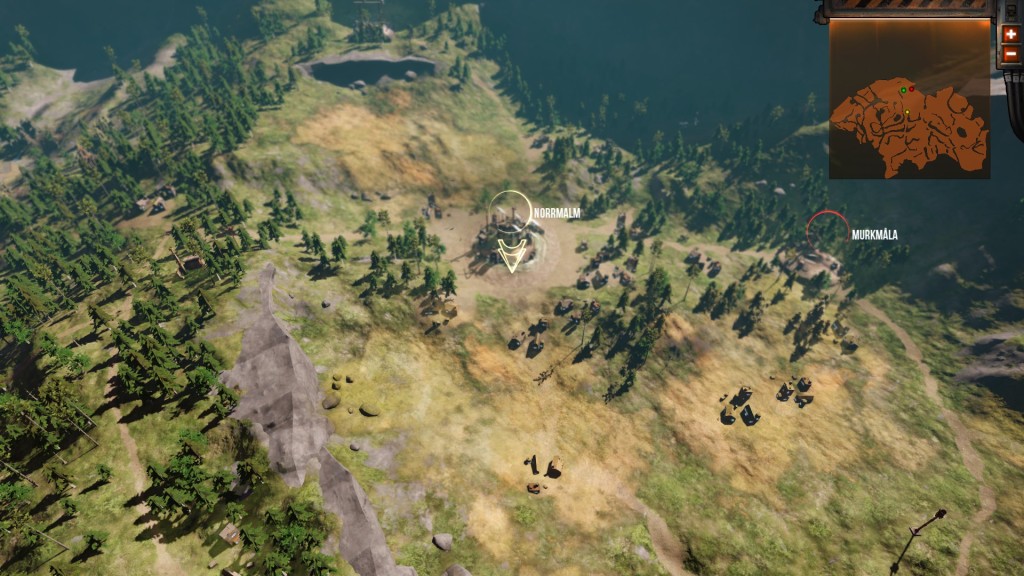 The character design is perhaps Krater’s most unique aspect. Your heroes, the townspeople and even the monsters roaming the wilderness all appear as embellished caricatures of their respective sources.

The Bruiser is a top heavy juggernaut with tiny legs. A bear or Björn, in keeping with it’s Swedish roots, is a mass of muscle and fur that would never survive outside the realm of video games. The style is very reminiscent of the shapes and dimensions seen in the little known, but enjoyable CG animated film, 9.

Since an overwhelming majority of NPCs in the game wear gas masks, their voices are muffled and often indiscernible, not unlike the beloved South Park character, Kenny. 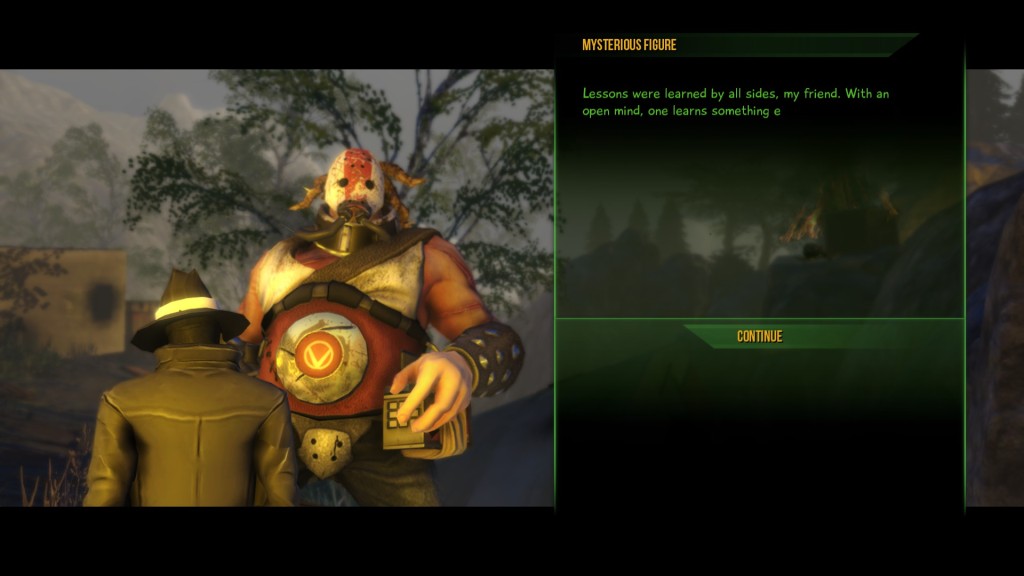 Individuals that “work together”

For some reason, you will find yourself routinely drawing a box around and re-selecting your three party members, in the exact same fashion as an RTS game. Why you can’t simply define that they move as one cogent group is beyond me. I suppose the argument could be made that placement of individuals can play an important role in combat, except for the fact that it doesn’t.

There is only one legitimate ranged class, and if they should draw an enemies aggro it forces your Tank to stop whatever he’s doing and go “recapture” that mobs attention. The most sensible tactic in the game is to cluster all your characters in a small region so that the Tank can quickly pick up strays, and other characters can benefit from your, as previously mentioned, “healing booster” enhanced AoE abilities. 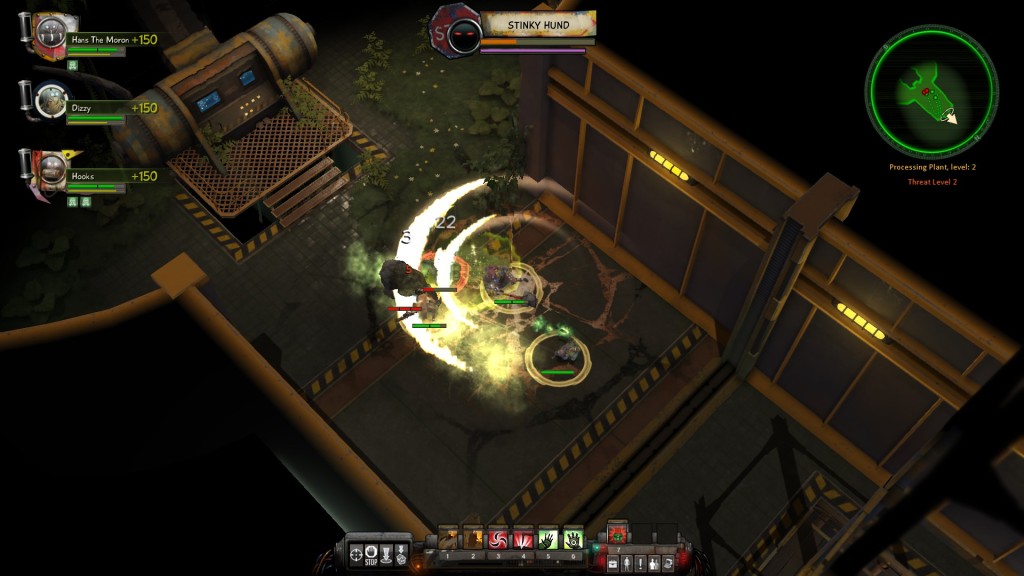 Not quite ready for Primetime

While the game was realeased on June 12th, 2012, the promised cooperative play aspect of the game will not go live until (theotetically) the 10th of July. It seems rather foolish of a game to be released without key systems implemented.

In a review I did a few months ago for Sol Exodus, I lamented about the lack of collision damage when your spaceship smashes into something. This feature has since been added into that game but at this point it’s “too little; too late”. All the reviews are in, the vast majority of purchases of the game have already been made (not taking into account vastly marked down Steam sales) and in my mind, Sol Exodus will always be “that space game that lets you ram into things” just as Krater is “that diablo-clone that didn’t have working coop”.

Krater is “that diablo-clone that didn’t have working coop”.

I doubt I will find myself playing Krater a month from now to experience the cooperative play whose coming is mockingly heralded by the first option in the game’s Main Menu being inert and an ever present, though disabled on-screen button during gameplay. 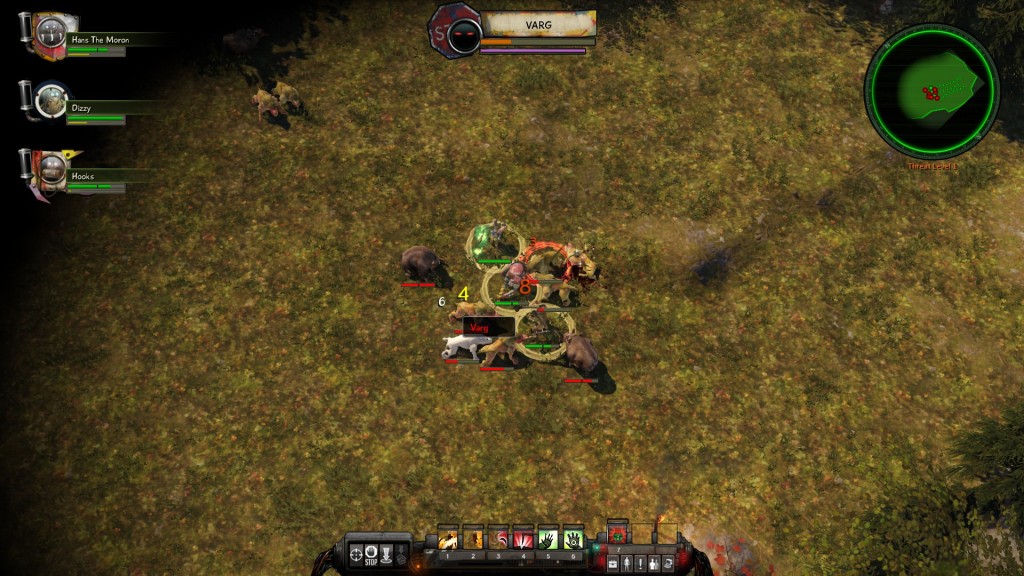 Krater can be a fun game, but it probably won’t hold a person’s interest for very long simply because there is such a limited amount of variety. You will spend a majority of the game spamming the same moves over and over again against enemies of the same dozen archtypes. The first hour you spend with Krater will mirror the second, tenth or twentieth. The graphics, setting and characters are inviting but there just isn’t enough context to keep you invested in collecting scrap metal or boar scrotums for long.

There just isn’t enough context to keep you invested in collecting scrap metal or boar scrotums for long.

The only real challenge the game presents is in it’s clunky healing system where pressing the hotkey only causes your cursor to become a green cross. You then have to cast it by either futilely attempting to target the wounded team mate amidst the constantly spewing, flashy particle effects erupting on screen while the battle is raging or dragging your cursor across the entire screen to the far upper left corner and casting it directly on their portrait.

Krater might have been an okay game to tide over fans of the “dungeon clicker” crowd until the release of Diablo III or something to get their collective juices flowing a few months after the fanfare had subsided, but instead FatShark opted to release the game in an unfinished state less than a month after the flagship game of the respective genre was released.

Why so high? Interesting setting and characters, combat is easy to pick up
Why so low? Not enough variety in skills, combat is shallow, no cooperative play at launch

Pro-Tip: To the left of your quick bar is an “Extract to Surface” button which will teleport your team out of a dungeon. Through the game never tells you that.