Video games are to me the most prized culmination of mankind’s expression of art and culture. I think they’re an excellent vehicle in which to explore and better understand the world in which we live.

In order to appreciate the objective of this article, it is first necessary to have a basic understanding of how a video game works: 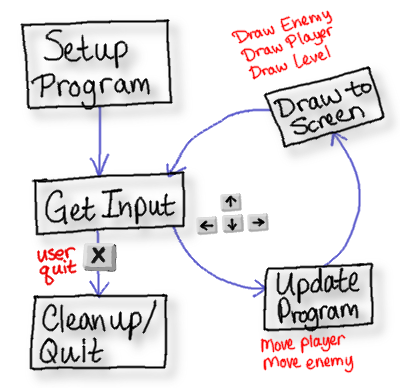 In programming terms, when most applications are executed they load their necessary resources into the machine’s memory and then await user input.

Whether this is a click event on your operating system’s built-in calculator app, the typing of a character in your word processing suite or the pressing of the “Add to Shopping Cart” button on your preferred e-commerce site, a vast majority of applications are simply reactionary. They exist in memory awaiting input from a user but otherwise remain in a static state until acted upon. Not so with video games.

In a video game, there is something known as “The Game Loop”.

… it enters into an endless loop wherein the same set of subroutines, or instructions, are repeatedly executed

Basically, once you execute a program (double click it’s icon on your desktop, select it from the Steam taskbar menu or pop a disc into your console) it enters into an endless loop wherein the same set of subroutines, or instructions, are repeatedly executed, the results of which are presented to the screen.

In Pong,  this means with each pass through the code, the program calculates the position of each paddle based on it’s previous associated data and incorporating any new user input. It also tracks the ongoing position, velocity and trajectory of the white square representing the ball.

In a slightly more technical example, Pac-Man exists because with every single tick of the clock his position, bearing and animation state (mouth open or closed) are accounted for. The same is true of each of the ghosts and the collection of variables keeping track of which dots and fruits should be rendered based on whether Pac Man has eaten them or not.

A video game works by operating in a continuous loop (not unlike life?). This is what allows a player to stand idly by and watch clouds pass over a fantasy realm and observe a virtual sun’s rising, cresting the sky and eventual setting without any input by the player.

Here is a very basic representation of The Game Loop:

While (Bacon == Delicious) // or something else always considered true
{

Video games are a simulation of a set of rules being executed over and over occurring usually between 30 and 60 times a second to give the illusion of continuous movement. A standard game running at 30 FPS executes it’s “game logic” 1800 times a minute. 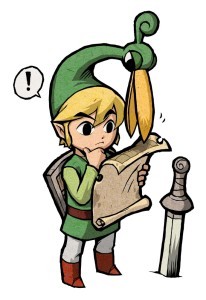 Hopefully, you found this little crash course in video game mechanics interesting but what I haven’t explained is how this simply miraculous yet now common place sequence of events can act as a metaphor for the world we inhabit. 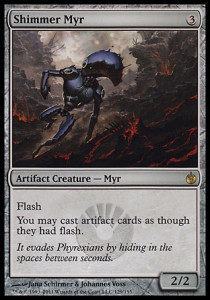 To understand that, I submit to you a card from Magic: The Gathering by Wizards of the Coast introduced in the 2011 Mirrodin Besieged block called Shimmer Myr.

It better sums up my hypothesis more succictly than any number of other words could possibly convey:

“It evades…by hiding in the spaces between seconds.”

The brilliance of this flavor text speaks volumes to me.

In video games (and in life) for every action, there is a reaction. Few people take the time to appreciate the incredible plethora of calculations taking place in spans of time humans aren’t even physically equipped to experience.

Every time you jump with Mario or lean out of cover in a shooter, a titanic amount of data is being processed of which we are only scarcely aware.

Player and enemy positions, current animation frames, approximations of physical laws and particle effects are being calculated on the fly; constantly and in extreme repetition. 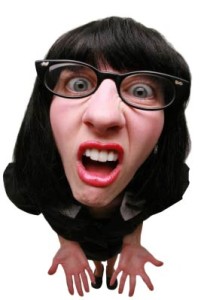 This colossal amount of data culminates into a mathematical representation of the current state of a scenario and then goes a step further and reduces that three-dimensional data set to a two-dimensional representation of what all these moving parts would look like were you positioned in that exact place, at that exact time, moving at that precise trajectory and speed, rotated to that particular angle.

It then projects this rendering to your monitor or television and then does so again, and again, and again… In a succession, so rapid your mind is only capable of perceiving it as fluid motion.

In that amount of time this calculation and the resulting visualization produced has occurred over a dozen times.

Now to get all metaphysical.

If video games are our best attempt at simulating experiences governed by a set of rules and an established order, whose to say that the real world is much different?

What he see, hear, smell, taste and feel may simply be the end result of a massive collection of variables being “worked upon” constantly, resulting in what we perceive to be as “reality” after all the numbers have been crunched.

As eluded to by the Shimmer Myr, there is an immeasurable span of time between our biological perception of one moment to the next. We experience only what we are able to with our limited set of senses.

Like a Zoetrope presenting the illusion of movement through the rapid and repeated display of static images,  it is conceivable that between the ticks of some unfathomable cosmic clock there is an ongoing equation being acted upon by not only our input and of those around us but perhaps also by some inconceivable force that, for lack of a better term, we may choose to refer to as Player One.