Iron Brigade, by Double Fine, is an exciting and unique take on the Tower Defense genre. Instead of just focusing on building turrets and sitting back while enemies are funneled through your deadly gauntlet, you become primarily responsible for defeating wave after wave of enemy that spawn from various corners of each map.

You control a giant mech called a “Mobile Trench” that lumbers over the battlefield equipped with an array of weapondry that comprise a stock selection of ranged weapon types: machine guns, shotguns, sniper rifles, grenade launchers  artillery cannons and sustained fire energy based weapons known as “Broadcasters”. 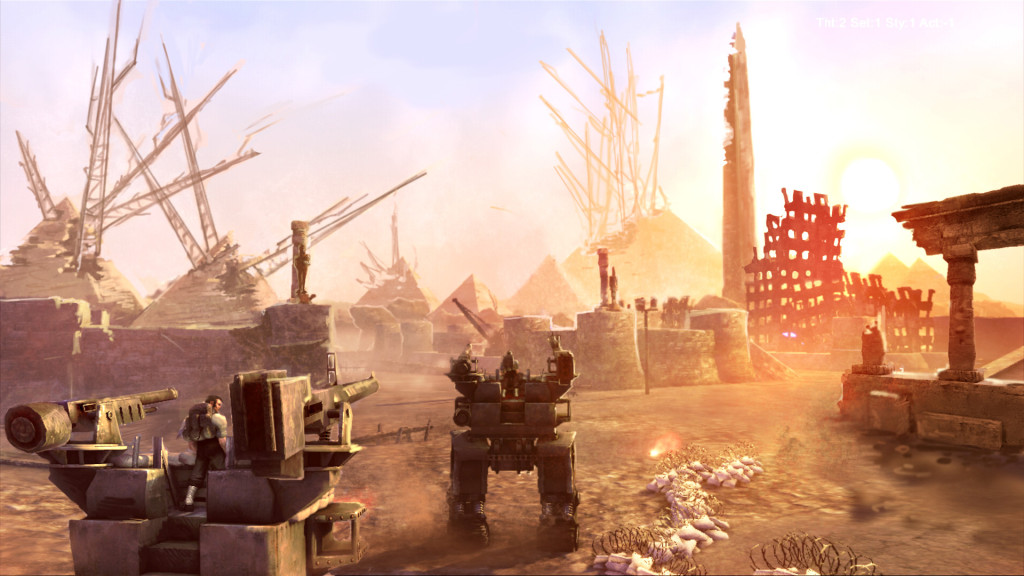 In an alternate past timeline taking place shortly after the first world war, a strange alien “Broadcast” is transmitted to two men, giving each the ability to construct amazing marvels of engineering. One man uses his new found ingenuity to construct mechanical legs which help injured veterans of war to walk again, while the other uses his talents to construct an unholy army dedicated to “spreading the broadcast”. The mechanical legs are then weaponized to be used in the battle against these monstrous alien-inspired constructs of propaganda. 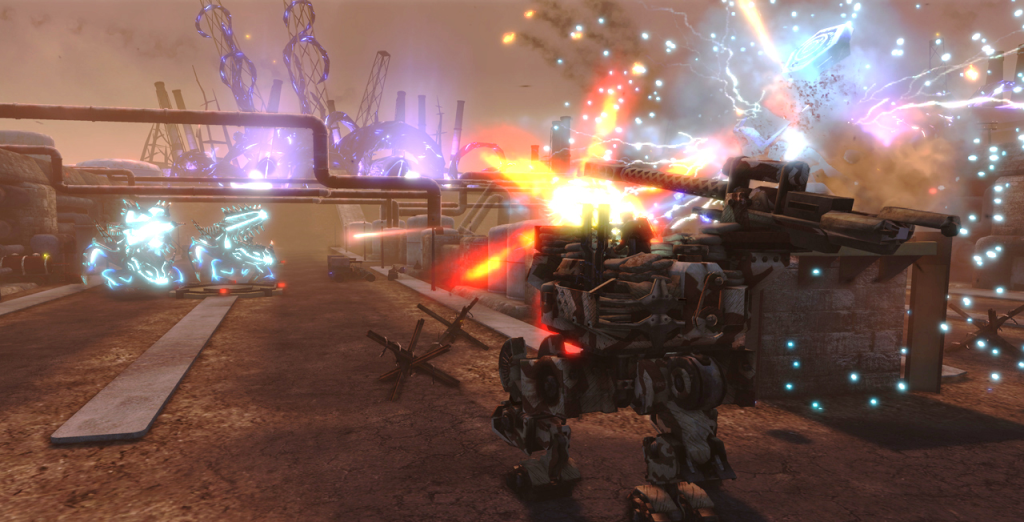 You will be treated to zany and atypical chatter…throughout your playthrough.

Double Fine is a company that has long been celebrated for it’s unique sense of humor. With spot on timing and just the right amount of self-depricating humor, you will be treated to zany and atypical chatter both from your chosen character and the stereotypical Russian supervillian that taunts you throughout your playthrough. While the characters canned catchphrases can become a little tiring after awhile, they are genuinely funny the first dozen or so times. 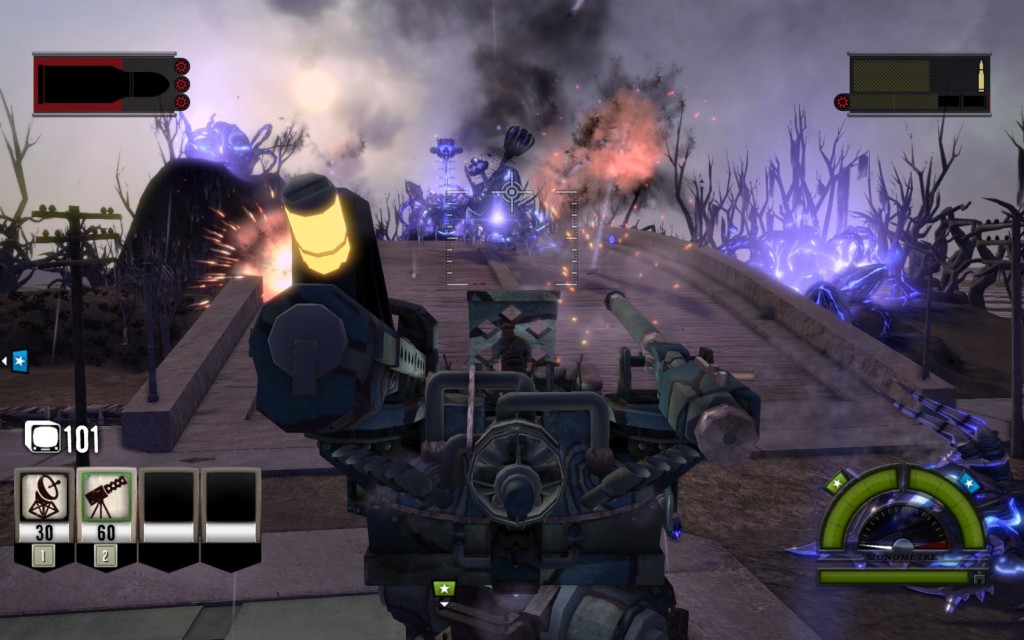 Between rounds you find yourself on the battleship, U.S.S. McKinley, where you can select your mission, use the radio room to connect to other players and modify your Trench’s loadout. The system is simplistic but highly effective. You choose your chassis to determine the amount of armor and total emplacement (turrets) and weapon slots you have available. Your legs come in three variety to accommodate your play style: Bipedal legs can be used to sprint around the battlefield, tripedal legs allow you to enter an “entrenchment” mode which basically turns you into a stationary turret with the added bonus of improved reload times, and quadrapedal legs allow you to perform an AoE smash attack when enemies come near.

You can mix and match weapon types to facilitate a more versatile play style.

The final component of customization is your weapon loadout, different chassis’s have different amounts of weapon slots, and different weapons require different amounts of slots to be equipped. The largest types of chassis provide for six total slots (three on each side). Smaller weapons like machine guns only fill one slot, so you could enter battle with six automatic guns ablaze or you can mix and match weapon types to facilitate a more versatile play style. 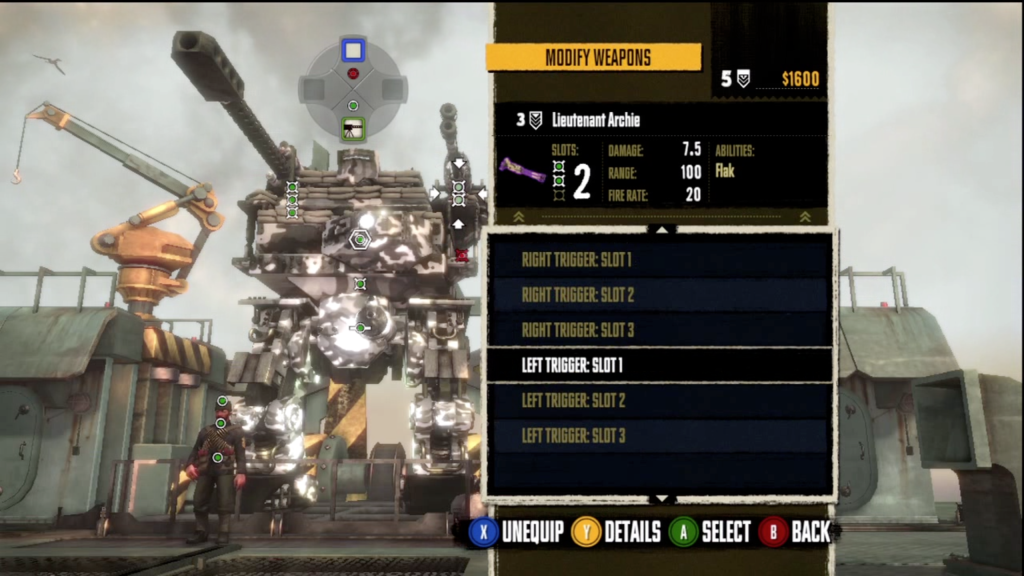 At the end of each round you are awarded loot, the most prized being in the form of weapon upgrades that you can swap with your lower level variants. Each weapon, unfailingly, is accompanied by a silly description of itself, making each new piece of equipment not just an upgrade but another source of humor in an already hilarious and Lol-inducing game. 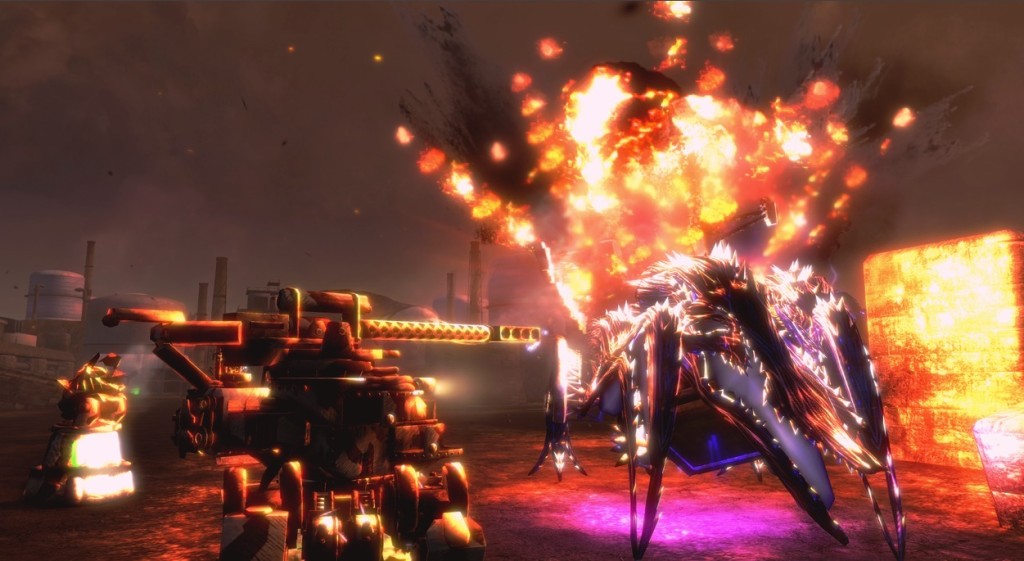 The core mechanic behind Iron Brigade, besides unleashing a hell fire barrage of bullets, is to collect scrap from your fallen foes in order to constuct turrets and various other gadgetry. When you kill a foe they wretch up a variable amount of scrap in the form of flickering blue televisions (in the context of the game this makes sense). You can use these as currency to call in aerial drops such as turrets, slowing dampening fields and auto repair stations, which once summoned fall out of the sky and land then construct themselves on the spot you indicated, all in about six seconds. By placing turrets and slowing mechanisms in key points around the battlefield you can create a nigh unbreachable front where enemies, no matter how numerous, will be unable to break through your line and attack whichever objective you are defending at the time. 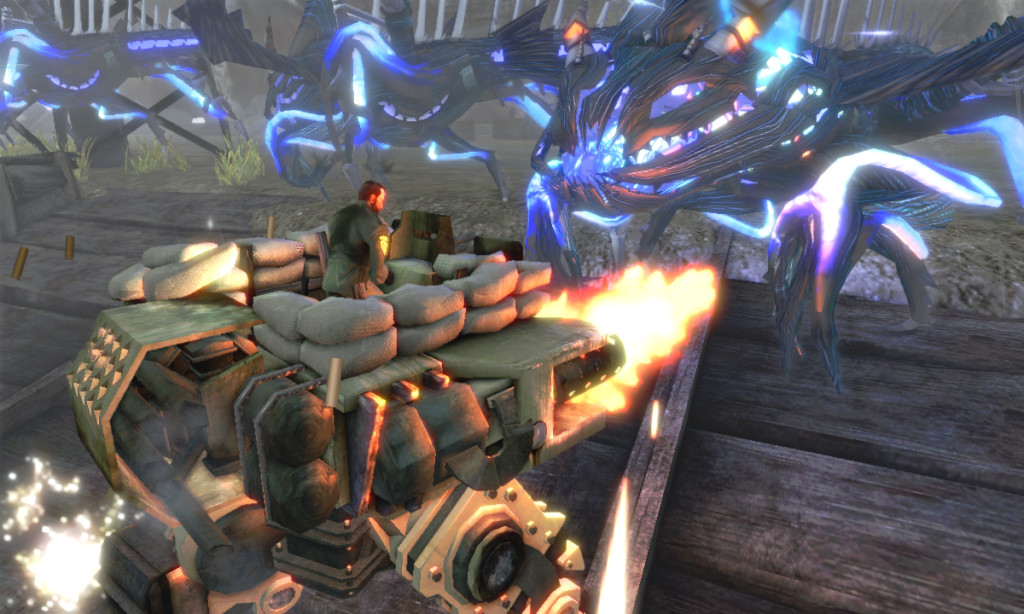 The only real issue with enjoying Iron Brigade is it’s confusing and unintuitive matchmaking system. To play Iron Brigade with a friend you both must connect to your Games for Windows account and then while sitting on the U.S.S McKinley between rounds one player must go over to the Radio Room and select the “Search for Recruits” option. This puts them in a state where other players who are looking for a teammate can join them. Meanwhile you must go to the radio room and select the “Find a Friend” option which opens up the Games for Windows interface. Then you select your friends account from the friends page and select the option “Join Session In Progress”. At this point the first player then must immediately click “Stop searching” in order to avoid unwanted additional players from joining the group.

It’s a very clumsy system. Along with the inability to kick players once they’ve joined, no integrated chat interface or the ability to trade items, Iron Brigades social aspects are extremely limited. This is one of the few areas where genuine improvement could actually be made. 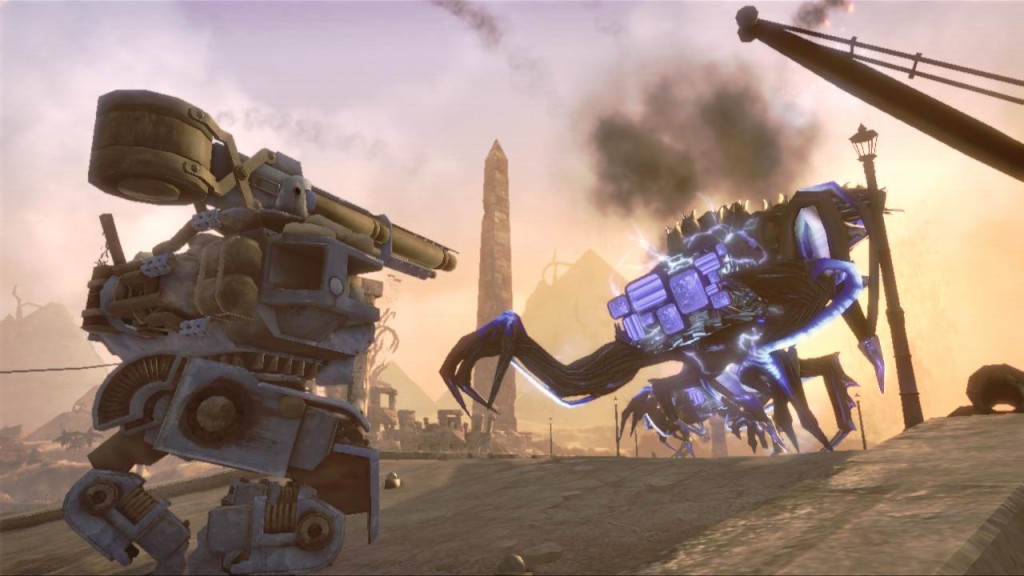 Iron Brigade is fun. Almost more fun than you can put your finger on.

Iron Brigade is fun. Almost more fun than you can put your finger on.

Why such a simple game oozes such charm and personality while providing hours of entertainment based on such an often used gameplay concept is difficult to nail down. Maybe it’s the great comedic take on a typically straight laced genre, or the ability to take the reins of a multi-ton battle walker, the deep yet accessible customization or just the rich landscapes and silly inhabitants of the world.

Iron Brigade is well worth it’s modest price of admission and if you can convince a friend to buy it you are in for many hours of enjoyment and laughter ahead of you.

Protip: During the vanilla game, the most effective loadout seems to be: The Karlsson heavy chassis, bipedal legs, three machine guns and three anti-aircraft flak guns. Post DLC, swapping out one half of your weapons for the ridiculously fun to use Laser is the way to go if you want to maximize your DPS.