The newest yearly installment in the Assassin’s Creed franchise has been released, placing you once again in the shoes of assassin savant, Ezio Auditore da Firenze. In the year between the release of Assassin’s Creed: Brotherhood and Assassin’s Creed: Revelations, he has aged two decades, and has matured into a more dignified and thoughtful protagonist, a significant departure from the young, brash playboy of the previous two iterations.

The benefit of having a successful franchise is that developers only need to improve upon what they already have in order to guarantee returning customers. In this edition of AC, little changes and enhancements do alot to further convince the player that they are actually experiencing the life of a man, living in the memories of a man, living in 16th century Istanbul. *double checks* Yep, that’s right.

I haven’t given serious playtime to an Assassin’s Creed game since about the time the term “yearly installment” became a thing. Its not that the AC games were bad games, its that they just didn’t seem to innovate. You can only stalk so many corrupt politicians through a crowded marketplace before the thrill of the hunt becomes a repetitive chore.

But, in Assassin’s Creed Revelations the developers have added a number of welcome additions to spice things up, but fear not, a majority of the gameplay still revolves aroundreenacting that one song from Alladin. 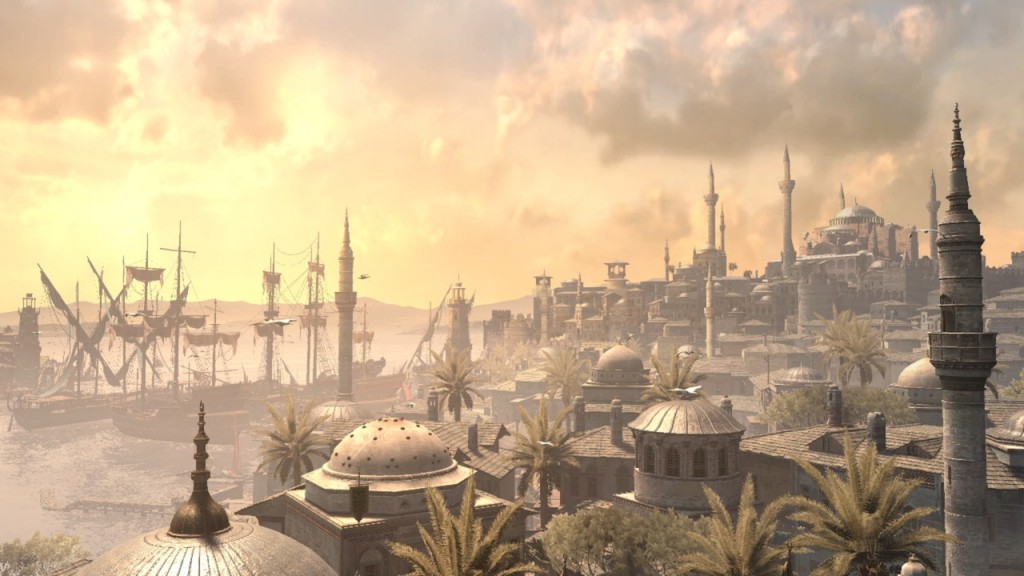 A living, breathing place
One of the strengths of the Assassin’s Creed games has always been their ability to present a foreign and distant land and still manage to make it feel very human and relatable (assuming of course that you don’t live in Jerusalem, Rome or Istanbul already, and even if you do I’m sure it’s changed in the last 500 years).

This year Ezio finds himself transplanted to Constantinople, better known now as Istanbul, Turkey. It is a gorgeous place. It’s warm vibrant hues of yellow and orange, are a welcome departure from the cooler “earthy” tones of previous games.

I was particularly impressed with it’s respectful, non-clichéd take on the Arab world, a majority of the women in the game are clothed in full burkas and gone are the prostitutes in which to entice and distract guards. Replacing them are Romani performers, mistakenly refered to as Gypsies.

The Hook to my heart
The most significant addition to Assassin’s Creed Revelations this year is easily the “Hook Blade”, an add-on for your perennial Hidden Blade apparatus, this retracting hook replaces Ezio’s right Hidden Blade, and in doing so opens up greater possibilities for climbing and surmounting obstacles than ever before.

This new gadget for your utility belt is introduced early on and with it you are able to scale the buildings of sprawling 16th Century Constantinople with unprecedented ease.

In previous titles, Ezio (and Altair) would monotonously scramble up shear surfaces, sometimes making impossible almost comical grabs, this could become laborious rather quickly as trying to navigate to a location in a straight line, would have you scaling over several intersecting buildings, fiddling with the analog stick the whole time trying to find that next acceptable foothold to hoist yourself onto.

With the introduction of the Hook Blade, Ezio can now make dramatic vertical leaps, latching onto ledges much higher then before. This easily cuts your climbs in half and makes you feel like some sort of Renaissance superhero instead of just a man with a knack for parkour.

With the Hook Blade’s extended range you can now consistently leap off of buildings, sail threw the air and simply by holding a button whilst in freefall Ezio will automatically latch onto any nearby ledge or outcropping in reach, making for some pretty spectacular saves.

There are also sporadically placed “zip lines” found running between various rooftops in the city, leaping in their general direction will cause Ezio to latch on to them and slide down to cover large tracts of land, aiding in your escape from pursuing guards and even allowing you to contextually perform an assassination should a guard be foolish enough to be standing under a zip line.

Let’s hope the Hook Blade can be incorporated into the real world version of the Hidden Blade. 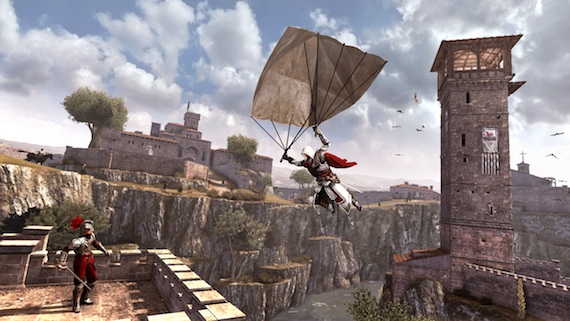 Oh, and the parachute is cool too.

Now with more bombs!
Craftable bombs/grenades make a center stage appearance in Assassin’s Creed Revelations, their introduction is actually woven into the narrative, like the hookblade. The ingredients to make them are found in treasure chests (now liberally scattered around town), on defeated enemies (why so many guards are carrying gunpowder and clay around with them, who knows) and probably most ridiculously: wall mounted cabinets which seem to have been placed every few blocks.

These cabinets are located everywhere and will try your suspension of disbelief. I found myself asking: So if this is history being reenacted, are there still cabinets on the walls all over Istanbul today?

Opening one of these cabinets nets you even more ingredients and grants the player access to a simple crafting interface which allows you to combine various gun powders, casings and other ingredients into a variety of useful improvised explosive devices which can be precisely tossed by holding a button and adjusting your arc or dropped at your feet during an escape by tapping the same button.

Particularly useful are the “Cherry” and “Smoke” type bombs. The Cherry bomb simply creates distracting noise which guards are seemingly unable to resist investigating, allowing you to easily slip undetected into areas whose entrance was once blocked. While the Smoke bomb is perfect for performing notorious deeds right out in the open under the cover of blindingly thick smoke, thankfully this camouflage is not visible in “Assassin Vision”, so while all guards and civilians caught in it cough and hack, blinded and stumbling around, you can enter it without worrying about accidently knifing the wrong NPC(s).

Additional Enhancements
You are now able to summon assassins to take town guards for you with the press of a single button. This is a welcome addition for me as I am probably the worst assassin ever. Almost all my encounters start earnestly with me skulking along roof tops watching my prey’s movements but this quickly dissolves into slaughtering an entire fort of enemies after failing to perform even the most basic of assassinations. This isn’t a failing on the games part however, AC’s standout controls and virtually unparalleled animation system gives a player all the tools and responsiveness necessary to successfully dispatch foes with cunning and grace, it’s just that patience doesn’t seem to be in my wheelhouse, but stabbing nameless thugs in the face is.

To improve the odds you can hide yourself in with the crowd better than ever, when you approach a cluster of people moving through the streets like a school of fish, you can blend into their ranks as before, but with the added visual effect of fading all their colorful clothing to the more muted grayscale tones of Ezio’s ensemble, this was handled really well and happens much more organically then before, especially considering the mechanic originated as Altair only able being able to blend in with the white-hooded monks doing the conga linethrough the streets of the first game.

It is also nice to see the infamous wanted posters placed on chimneys and other ridiculous places removed. As well as a significant reduction in rooftop hay lofts.

What doesn’t work
One new mechanic in Assassin’s Creed Revelations that doesn’t pay off is the new mini game used to defend against incoming Templar attacks against your hideouts, from time to time you will be informed via your map & mini-map that Templers are assaulting one of several hideouts you gain during your playthough. To halt the invasion you are forced to stand on the sidelines and act like a military commander sending your loyal troops in to defend against the attackers, it plays like a clunky and ill conceived tower defense game where you line the rooftops of a street with archers and blunderbuss wielding assassins (guns play a larger role then in any previous installment), fill the streets below with walls of refuse (which magically appear fully assembled) and wait impatiently for all the waves of distributed enemies to die in your gauntlet of death, and for this portion of the game to be over. It is not convincingly implemented, and worst of all, it simply isn’t fun. 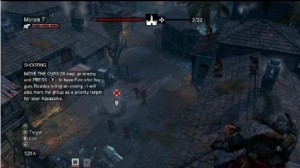 Should I play it?
If you are a returning Assassin this is an obvious buy, if you are new to the series, you couldn’t have chosen a better time to get involved as the game does a fair job of catching you up to speed on what has transpired in the previous three games. Besides, with all the new gameplay enhancements the series has seen over the years, going back and playing the first game would probably feel like an emaciated version of itself.

To quickly catch you up on Assassin’s Creeds lore: You just killed the girl who was shaping up to be your love interest in the present because you were possessed by… something.  By the way, Adam and Ever were actually aliens that created humans and their technology is so advance it’s indistinguishable from magic. Now your in a coma reliving your ancestors’ past lives in a machine capable of interpreting genetic memories, while a man’s soul seems to have become imprinted on the memory machine your locked in, and he wants to use your brain to break free and –well, you get the picture.

Final Word
Assassin’s Creed Revelations adds enough to it’s  formula to breath some more life into a franchise that had previously been resting its laurels on just it’s stunningly beautiful visuals,  tight control scheme and the simple, yet endlessly joyful act of virtually stabbing people in the back.

Until next time Ezio.

Why so high? It’s an enjoyable game with many hours of gameplay, stunning visuals and buttery smooth animation starring a likable protagonist.

Why so low? It’s not a particularly epic story or a new and innovative step forward in gaming, it’s a more polished and enjoyable version of what you probably played this time last year.